(2009)One provision of the Deficit Reduction Act, signed by President Bush on February 8, 2006, increased the look-back period for Medicaid applications from three years to five years. 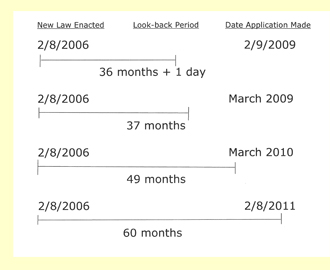 (The look-back period is the time during which the government will look to see if an applicant has given away assets, and if so, impose any applicable penalty.)

However, the expanded look-back period was phased in – it would take three years for this change to affect new applications. A directive from the Pennsylvania Department of Public Welfare explains why:

The three years is now upon us.

The look-back period has begun to expand daily, and will continue to expand for the next two years, as illustrated above.